With services ranging from QDRO preparations and Malmquist analyses to monthly Advice columns, our legal team is focused on providing our clients with a full spectrum of Family Law financial services.

Both professional and empathetic, we bring simplicity to our clients when handling their complex financial needs. We gauge our client satisfaction on efficient resolutions as well as gaining trust through their level of comprehension regarding the process. 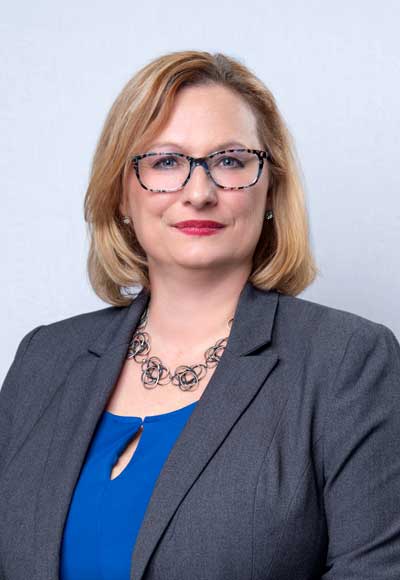 Emily opened a solo law practice in Las Vegas in 2003 with the primary focus of family law. Since that time Emily has worked diligently to establish a reputation as a knowledgeable and aggressive attorney, gaining the respect of both her peers as well as Judges. Emily has grown her practice over the years and in 2010 gained the credential of Certified Family Law Specialist by the State Bar of Nevada. This is the top Family Law credential an attorney can obtain in Nevada. Emily is a fellow of the American Academy of Matrimonial Lawyers and officer of the Nevada Chapter, fellow of the International Academy of Family Lawyers and an AV Preeminent Rated Attorney by Martindale Hubbell. Emily is a certified parenting coordinator and mediator, although her primary focus is litigating complex and/or contested divorce and child custody matters in southern Nevada and Nevada family law appeals. She is particularly knowledgeable in handling family law appeals, complex property division and financial issues, international child custody issues, parental kidnapping, and high conflict child custody cases.

Prior to becoming an attorney, Emily worked for three years at the Tobacco Control Resource Center and Tobacco Products Liability Project in Boston, Massachusetts doing research projects on legal issues relating to tobacco. Emily has worked for the New Hampshire Department of Justice Consumer Protection Division and three law firms in Massachusetts in the areas of family law, tobacco and other toxic tort litigation, real estate, business transactions and estate planning. Emily writes children’s books for children going through family law issues and operates a publishing company for children’s books. While her practice is focused in southern Nevada, Emily is also licensed to practice in the 9th Circuit Court of Appeals, United States Supreme Court, United States District Court – District of Nevada, as well as all state courts in Arizona and California. 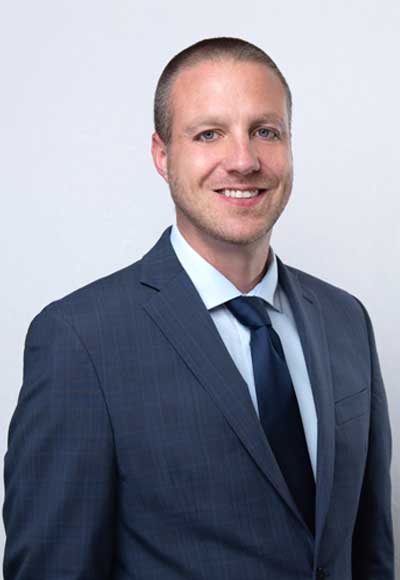 Michael grew up in Wisconsin, moving to Las Vegas in 2003. An avid Packer fan, Michael enjoys sports. Michael also enjoys spending time with his dogs (English and French Bulldog) and his wife, who is a fellow family law attorney.

Michael has a Bachelor’s in Business Administration in Management from UNLV. Michael owns a commercial LED lighting business with customers worldwide and many notable, high-profile projects.

Michael earned his Juris Doctor from Boyd School of Law at UNLV. While at Boyd, Michael was selected as Outstanding Community Service Volunteer and also received an academic scholarship. While in law school, Michael focused on classes taught by adjunct professors who are active practitioners in the community—with an emphasis on legal writing and trial advocacy. This includes classes taught by District Attorney Steve Wolfson and esteemed retired Federal Judge Philip Pro.

Michael’s style is considered aggressive but reasonable. With a focus on high-conflict contested divorce and custody matters, Michael has significant courtroom and trial experience. But, Michael also has the ability to settle cases outside of court, when the terms are right.

Michael has exceptional client satisfaction as his clients know he is looking out for their best interest, and they appreciate Michael’s candid advice. 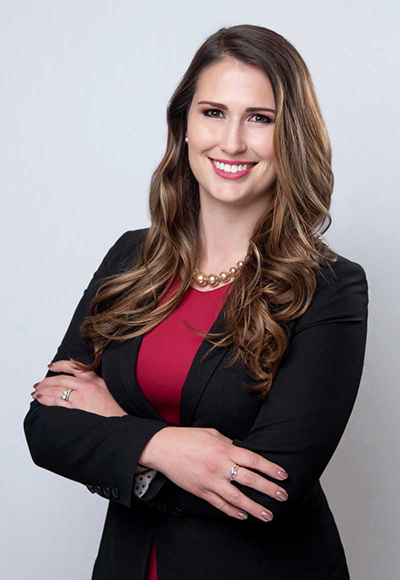 Ashlee attended the UNLV Boyd School of Law part-time evening program while working full-time at a law firm and volunteering as a Court Appointed Special Advocate (CASA), helping foster children in the courts. During her time at Boyd, Ashlee was also selected to be a student attorney with the Mediation Clinic providing free mediation services to small claim litigants and family court litigants who cannot afford to pay for mediation services. Ashlee also received mediation training from the renowned Saltman Center for Conflict Resolution.

During law school, Ashlee first worked for Clear Counsel Law Group, a probate and estate planning firm. In 2014, Ashlee joined McFarling Law Group where she started as a legal assistant, moved up to law clerk and then associate attorney. Her experience in each aspect of working in a law firm gives her keen insight into the procedural methods for obtaining the best results for her clients.

In 2016, Ashlee obtained her Juris Doctor from Boyd School of Law, where she received a CALI award as the top student in her legal writing class and Highest Pro Bono Honors. In 2017, Ashlee was licensed to practice law in Nevada and the U.S. District Court of Nevada. In 2018, she was awarded the Outstanding Service Award for her work as a CASA.

In her spare time, Ashlee enjoys traveling, concerts, and comedy shows. She also enjoys outdoor activities such as running, hiking, and snowboarding. 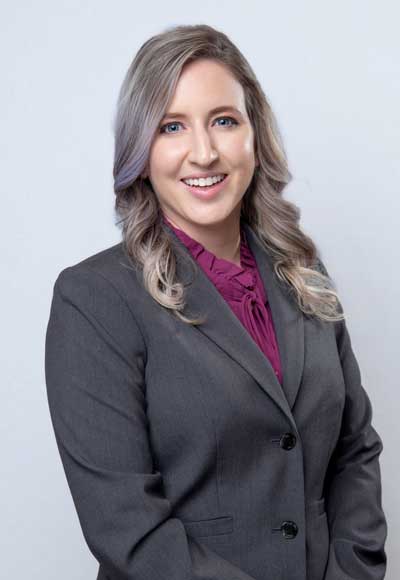 Kimber was born and raised in Las Vegas, Nevada, where she learned to love the heat. (It’s a dry heat!) She developed a passion for storytelling and in 2015 graduated from UNLV with a Bachelor of Arts degree in Journalism and Media Studies and Sociology. Kimber began working at the Las Vegas Review-Journal in 2013, covering stories about local crime and the courts. She wrote several stories about child abuse and domestic violence, which sparked her desire to become an attorney and do more for voiceless Southern Nevada communities.

While at Boyd, Kimber was an executive board member of PILA and OutLaws (a law student organization focused on LGTBQ advocacy), and was a member of the Immigration Law Society, the Organization of Women Law Students, and the Health Law Society. During her first year of law school, Kimber co-instructed a weekly Paternity and Custody course at UNLV. During her third year, she worked for the Family Justice Clinic as a student attorney, working on cases related to guardianship, adoption, and Special Immigrant Juvenile Status.

In 2019, Kimber obtained her Juris Doctor from Boyd, where she received CALI awards for earning the highest grade in her legal writing, pretrial litigation, and environmental law courses. She also received a CALI award for her work in the Family Justice Clinic, and she earned a place on the Dean’s List beginning in 2018.

Kimber is licensed to practice law in Nevada and the U.S. District Court for the District of Nevada in 2019.

When she’s not representing Nevada families, Kimber enjoys playing volleyball, hiking, snowboarding, and reading. She loves dogs with her entire being and has two of her own. 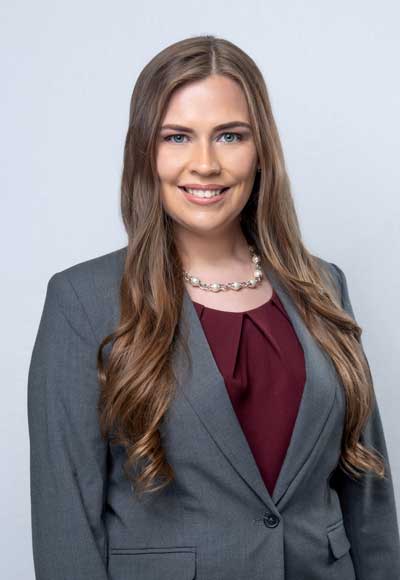 Samantha was born and raised in Las Vegas, Nevada where she developed a dedication to serving the local community at a very young age. Her sense of commitment was fostered in the local schools she attended. Samantha knew she wanted to be a lawyer since she began Speech and Debate in the ninth grade. Samantha graduated from Arbor View High School with an Advanced Honors Diploma.

Starting in 2016, Samantha attended the William S. Boyd School of Law at the University of Nevada, Las Vegas, earning her Juris Doctor in 2019. While a law student at Boyd, Samantha served as President of the Public Interest Law Association, Vice President of the Organization of Women Law Students, and was an active member of the Phi Alpha Delta Law Fraternity. Samantha was also named a Public Interest Fellow for her dedication to the community. Samantha also worked as a Junior Staffer for the Nevada Law Journal, before being promoted to Articles Editor in 2018, where she assisted in publishing Volume 19 of the Nevada Law Journal.

In her second year as a law student, Samantha completed an externship with the Honorable Frank P. Sullivan with the Eighth Judicial District Court, Family Division. She also worked with the Children’s Attorney’s Project at the Legal Aid Center of Southern Nevada where she helped to ensure that every child had an opportunity to have their voice heard in court.

Samantha also practiced as a student attorney, gaining invaluable legal experience and practice while still in school. As a student attorney, Samantha worked in the Clark County District Attorney’s office, as well as the Family Justice Clinic in the Thomas & Mack Legal Clinic. She remains fully committed to furthering the causes that promote justice for families and children in the Southern Nevadan community.

In 2019, Samantha obtained her Juris Doctor. Samantha joined the McFarling Law Group legal team after law school and brings her keen sense of professionalism and empathy to each and every case she collaborates on. In addition to being a licensed attorney in Nevada, Samantha is also a Certified Mediator and adds diplomacy to her legal expertise by seeking favorable resolutions for both parties.

In her spare time, Samantha enjoys spending time outdoors and taking trips to admire the natural beauty of the Southwest. She has a creative personality, finding joy in crafting and home improvement projects with her fiancé. When not working she enjoys spending time reading at home, while surrounded by her two cats and her desert tortoise.